New ebook: "A Star in My Life" (Victory Storm) 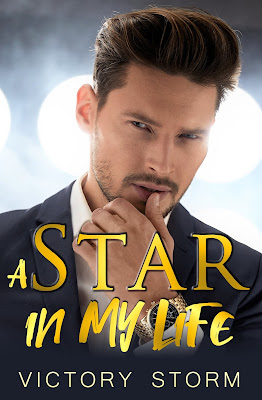 What’s gonna happen when you’ve just run the risk of breaking Marc Hailen’s nose, the actor known to have just insured his body for ten million dollars?
Berenice didn’t think she has ever felt the need to answer a question like that, but the adverse fate, together with the hostile quadrature and constellations, has led her to encounter one of the most handsome, famous and well-to-do men at the time!
Will Berenice be able to find a solution to hold off the pompous and arrogant nature of the star Marc Hailen, without falling in love with him?

Extract
Just behind him there was one of the posters stuck up by fans of the actors starring in The Supremacy, the movie that was being shot in those days.
It just took a few seconds for her to match perfectly the image of the actor Marc Hailen with that one of the man being in front of her.
She opened her mouth to speak, but she was barely able to make sounds.
“Well, what now?” he went on, more and more irritated, making Berenice’s brain go haywire. This last one was reviewing all the articles and videos that she had seen about him.
“You insured your body for ten million dollars,” was the one thing she could say with a feeble voice.
“That’s right. And now, unless you want to spend the rest of your life paying for your mistakes, I would advise you to give me some ice and a coffee. At once.”